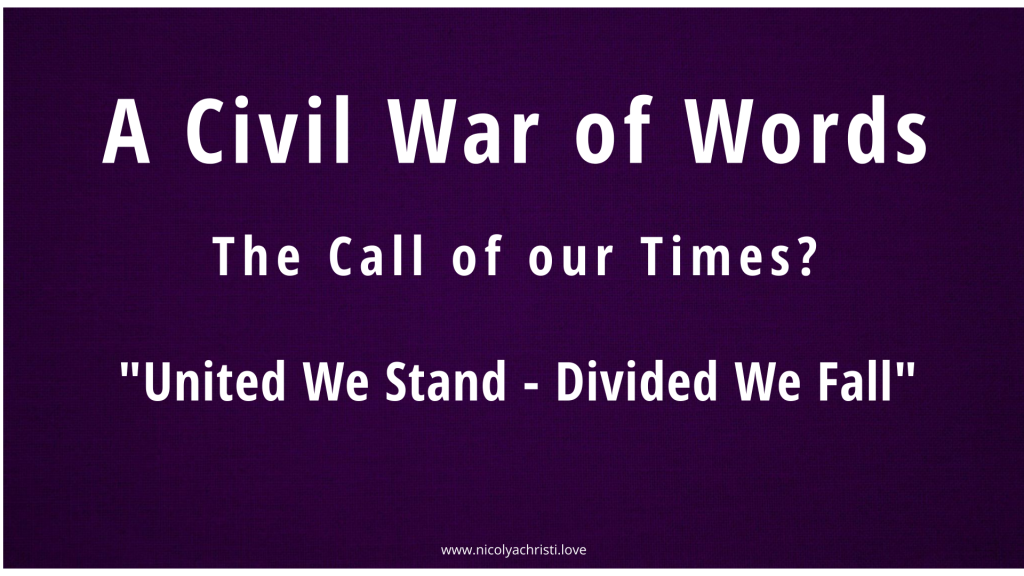 So-called world leaders and authoritarian decision-makers continue to operate from a ‘divide and rule’ objective resulting in the maintaining and further embedding of a polarised society. By dividing among ourselves we add fuel to the machine that is the global-wide power-over system of authority – one that has dominated throughout human history.

Millennia of cultural conditioning runs deep in the veins of the collective body and so engagement with socio-political narratives that compel us to take sides not only separates, but perpetuates a cycle of conflict through the ongoing reaction society has to political rhetoric. This autopilot mode of reaction is especially evident on social media where a politically-cognisant global community are caught up in a civil war of words.

All across the world people are pitted against each other. We have only to look at the ‘Covid-19’ scenario to see the extent of polarisation i.e. ‘virus exists’ vs ‘no virus’, ‘pro-vaccines’ vs ‘no vaccines’, ‘pro C-19 tests’ vs ‘no C-19 tests’, ‘pro masks’ vs ‘no masks’. Another clear example is the current USA election/post-election event with people starkly juxtaposed and, to use a modern colloquialism, “hating on” each other, and so society plunges further into the abyss of separation and chaos.

There is a thin line between love and hate: What we all ‘love’ is the idea of a peaceful, harmonious and balanced world and what we ‘hate’ is anything representative of the opposite. We all desire the same ideals yet on the surface of things it would appear otherwise. Cultural conditioning inclines us to react to what is going on ‘out there’ in such a way that fosters conflict between us and another who may oppose our own point of view. Yet we are consciously evolving individuals in a consciously awakening world whose evolutionary call is urging us to transcend past conditioning and step onto a more conscious path where interactions are steeped in mutual respect and unconditional positive regard.

An instrumental foundation for a new paradigm is a collective who are unified albeit diverse in their perspectives and experience – unity in diversity. New paradigm communication encourages us to be curious about what another may share even if it is in contrast to our own thoughts. It invites us to wonder what may be behind another’s stance … and explore what we discover, ideally together. Being sensitive and transparent in our interactions, even when what we are hearing goes against our own (informed or uninformed) stance, is the direction that collective consciousness needs to move in if we are ever to transform the world.

As we move into a new conscious epoch old-style communication will fall under the spotlight and acrimonious reaction will be superseded by revelatory response. It is only natural to be in favour of something that another may not feel so enamoured by yet in these turbulent but transformational times what is most required is the honouring of difference, the maintaining of connections, and the fostering of harmonious exchange. What becomes lost over and over and generation after generation is the freedom and creativity that is ours when we agree to disagree from a place of understanding and mutual respect.

We are in the midst of a Wake-Up Call that entreats us to move beyond our pre-conditioned limitations when it comes to positioning ourselves in either/or, right or wrong, good or bad, friend or foe mentality – all of which are based upon our own personal belief systems – many of which have been arrived at through the absorption of a distortion of ‘facts’ and misinformation from a misrepresentative and politically collaborative/aligned media.

What is actually going on ‘out there’ in terms of the political drama and its cacophony of incoherence and contradiction; its agenda-driven rhetoric and spectacularly dysfunctional model of ‘leadership’? If we can remove our grey-tinted spectacles for long enough we might just come to observe how we are getting caught up in an old story of politics which pits people against each other: We might come to realise that ‘top down’ governance/authority reduces us to nothing more than mere pawns in its overarching game plan – a position we unconsciously endorse when siding one way or another and thus enabling perilous and injurious political plans to be imposed on the world.

What is it that compels us to jump on the bandwagon of dysfunctional politics/Big Business rhetoric; impels us to be swept along on the tidal wave of political narratives and storms that only widen the chasm between people and politics, the result of which causes greater division among society as a whole. We have only to look at the C-19 situation along with the ongoing political shenanigans to recognise this reality for ourselves. For all the while we are busy arguing either for or against, the Halls of Power, so to speak, are busy actioning unwholesome and deleterious agendas. An example of this is the lockdown scenario across the world versus the rolling out of the highly dangerous ‘5G’ along with the launch of thousands of irradiating satellites in Space. Multitudes of damaging activities such as these are the brainchild of a psychologically unbalanced system of ‘rule’ in no fit state to ‘lead’ communities, countries, nations, or the world.

Let us consider the following questions:

– Where has the old paradigm system of authority got us in terms of the cultivation of a peaceful and harmonious world; a world we are no closer to now than we were millennia ago?

– Where is the peace we have prayed all our lives for?

– Where is the peace our ancestors prayed, fought, suffered, sacrificed and died for?

– Where is the evidence of the legacy of peace we wish to leave to the world?

There can be no peace when we continue to oppose each other and allow ourselves to get caught up in the theatrics and tactics of so-called ‘global leadership’. Peace does not stand a chance when supporting an archaic and broken system of ‘governance and rule’. All that any of us wish for is for the conflict to stop. When are we going to fully realise that the only way to achieve this end is by refusing to participate or act in accordance with overarching authority that is combative, toxic, catastrophic and dis-ease ridden.

How to heal such an all-pervading affliction? Perhaps the first step is to wonder what exactly a political system has to gain by perpetuating a polarised population? All the while we are at odds with each other, systems of authority are not only assured longevity in regard to control and power but are actioning detrimental agendas under our very own (masked) noses. What would happen to the gargantuan malfunctioning empire that is global governance if the people of the world who voted it in were to vote it out in favour of enlightened governance that prioritises, above all else peace, harmony and abundance for ALL?

Right now our attention is diverted as we engage in a civil war of words on the battleground of social media all the while missing a crucial point – that in all of our bickering and sniping and taking sides we are maintaining a prehistoric system with its expectation that we will continue to war among ourselves and so remain distracted from what is really going on at the highest echelons of global government. This is the way of the old system – a dilapidated model of ‘leadership’ which has no place in a conscious and awakened world. The most wise, constructive and transformative step we can immediately take is to stop arguing among ourselves and instead withdraw from the political sham that is global governance. If we were to do so en-masse the result would be the collapse of the colossal machine that is dysfunctional ‘leadership’, which without our support, our ‘playing to type’, would buckle and fall.

Thousands of years later and still we rally to the war cries of a top-down power-over system as if we are stuck on autopilot, for this is what we have always done, what our parents did, and their parents before them, and so it goes back multiple generations. Yet the Spirit of Evolution compels us to take a giant leap and leave primitive outmoded systems of governance behind. It calls on us to unhook from an antediluvian system; to stop oiling the malfunctioning contraption (‘con’-‘trap’) that is ‘unconscious leadership’. It is time to review, re-evaluate and reset, to release ourselves from an unconscious and epigenetic default mode of ‘war’ mentality – be it pitting against each other, or a political war on humanity itself.

The time has come to transcend old paradigm politics and unconscious ‘leadership’ and cast these into the Fires of Conscious Evolution. The moment is upon us now to supersede the old political establishment – for history is no longer in the making but in the breaking … and the remaking … only on OUR terms if the majority of us are willing to speak up and speak out; step up and step out. By continuing to support the multi-dysfunctionality that is global governance, the inheritance we leave to future generations will amount to nothing less than the coming to pass of woeful end-of-world predictions. Many ancient prophecies have foretold of this window of time as amounting to the most profound and pivotal in human history – foretelling the birth of an unprecedented new epoch in which peace and harmony reign. Yet there are also prophecies that claim the opposite. What is clear however, is that the ultimate outcome will come down to us and what we choose.

The Spirit of Life is Calling – S-HE is on our side. We can fulfil prophecy that speaks of a New Golden Age (Classic Maya) and A Thousand Years of Peace (Hopi), for the evolutionary winds of change are beneath our wings. It is time to leave the old world behind and birth a new ‘Lotus Aeon’ (there is no lotus without the mud from which it grows). This moment – Now – is the most crucial and determining ever, and we need only open our eyes to fully recognise the current political scene for what it really is – an outmoded relic that is turning to dust and needs to be swept into the historical annuals of a bygone time. Now is the moment when we are afforded the rarest of opportunities to open a blank page and pen a new story for the world; not within a new chapter, or even a new book, but a brand new Tome into which we can write OUR STORY – one of a united collective co-creating a visionary and altruistic, conscious and harmonious, humane and humanitarian, compassionate and wholesome, inspired and abundant world for ALL.

United We Stand – Divided We Fall.